Dream Of The Woman In Blue

A woman, a child, a river, running. Spinning and swinging, dreaming and
playing. Lost. Scared… and fading away.

Somehow, I have found my way back to the beginning. Silent cinema has long lost its audience, just as our sensibilities for silent film have faded over time. I was, and remain curious about the impact of silent film, not from an academic point of view, but rather as a means of expression and representation. Amongst the onslaught of surround sound and digital technology, I am drawn to the gentle power of what has long been perceived as a dead language. 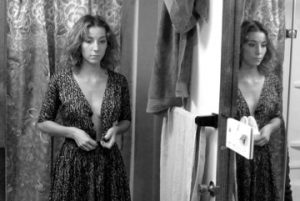 Dream of the Woman in Blue is a narrative loosely connected by character, movement and aesthetic. It is not meant to mimic or copy a certain epoch of cinematic history. It is an exploration in looking that encourages a construction of the narrative through viewing. The film is based on a series of nighttime dreams I think I had once. 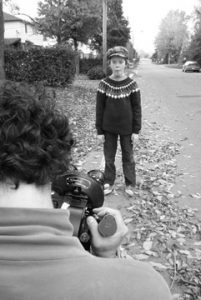 Flynn waits for his cue. Photo by Cheryl Bellows from Dream of The Woman in Blue by Roy Cross